How to Setup and Mount a DSLR on the NN3 MKII 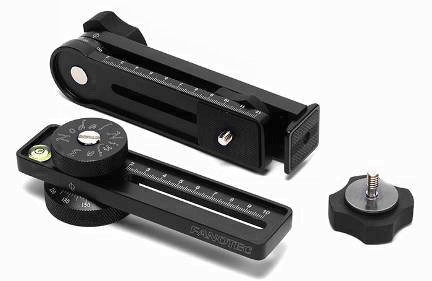 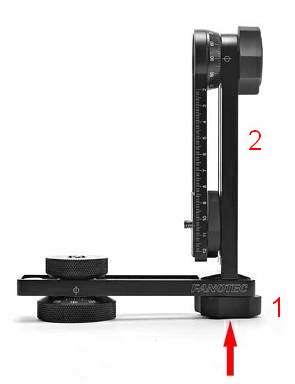 
Place vertical arm assembly (2) on lower rail assembly and secure with the vertical rail friction set knob (1).
Make sure the vertical assembly is positioned so the upper rail is facing so it's on the inside. You will see the vertical rail also has two feet at the base - the longer is to point inwards, towards lower rotator.
There are only two adjustments needed - lower and upper, unless you have an offset tripod mount and using the T-adapter. 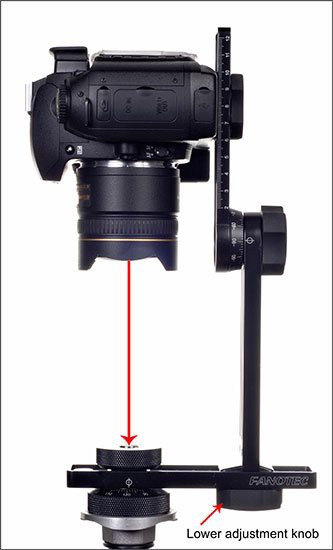 
With the camera/lens mounted, rotate the upper rail so it is perpendicular to the ground. Point the camera directly down, making sure the barrel of the lens is in line with the upper rail.
Loosen the lower vertical rail knob (shown in image as adjustment knob), slide the vertical and upper assembly back and forth on the lower rail unit until the camera/lens is positioned directly over the lower rotator knob (with marking).
You can look through the camera viewfinder to help center. Once centered, you have your first of two settings. 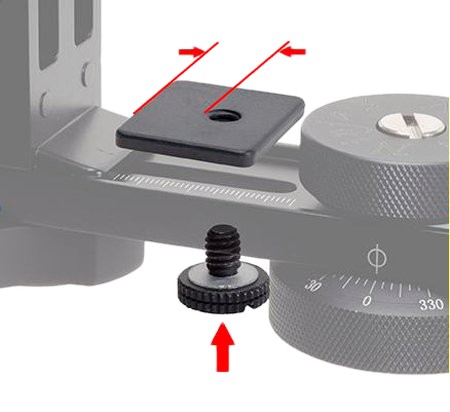 Insert a rail stop as shown and tighten to lock, and remember this position. 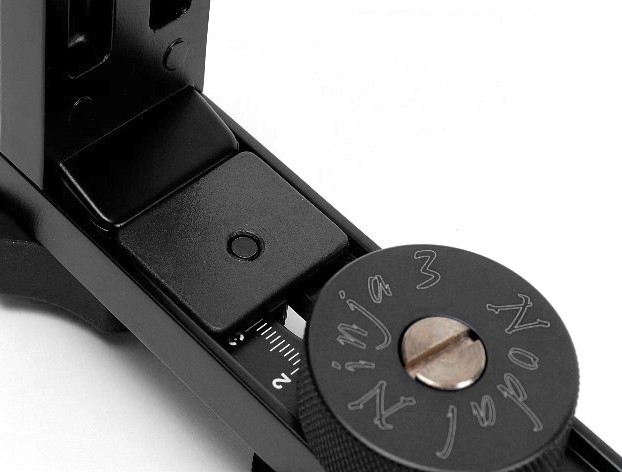 The lower position is now set and will not change regardless of lens or focal length.

Loosen the upper rotator knob and rotate the upper rail with camera/lens still attached so it points straight out (parallel with the ground), as shown below. This position is known as 0 degrees. 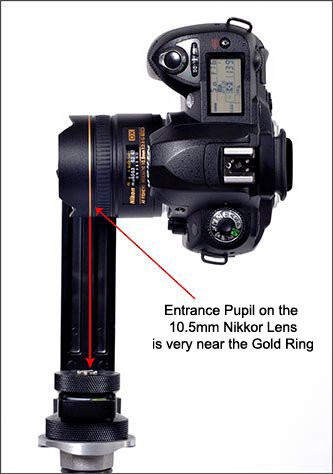 Entrance Pupil on the 10.5mm Nikkor Lens is very near the Gold Ring. 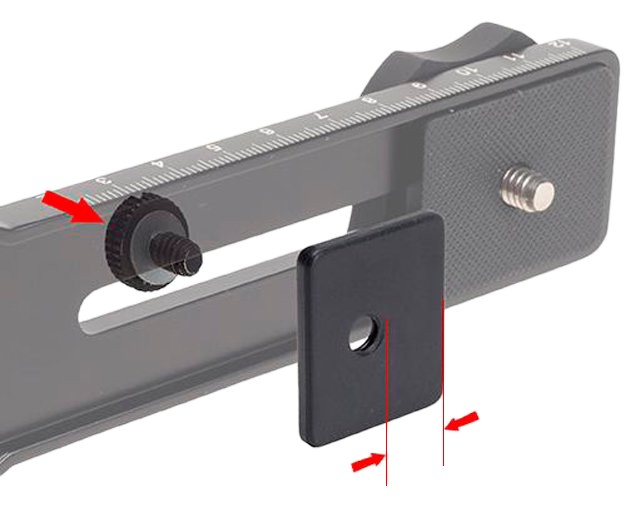 Insert a rail stop as shown and tighten to lock, and remember this position. The upper position is now set, unless you change camera and / or lenses or vary the focal length, it will remain as is. 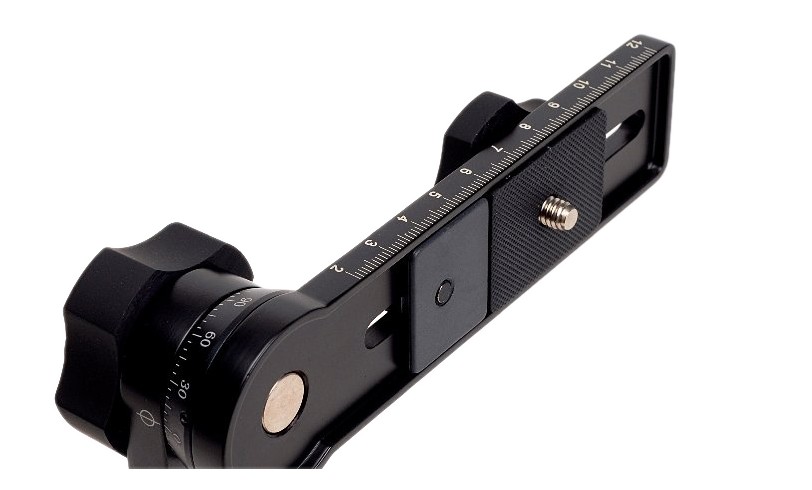 Using the rail stops after you learn your settings will allow you to remember the same position when re-mounting your camera. 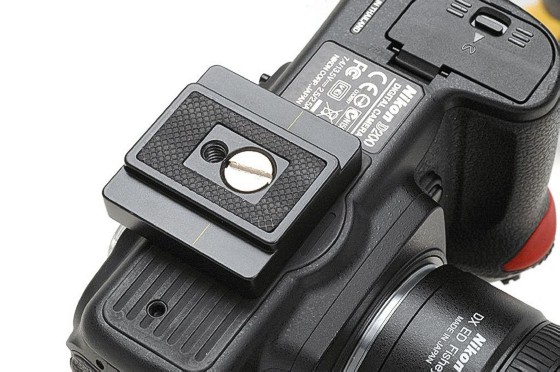 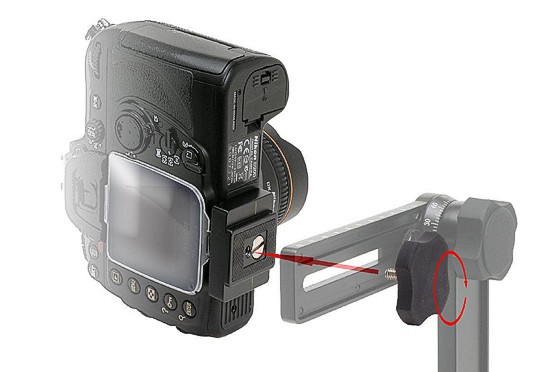 When mounting the camera plate (CP), make sure it is perpendicular to the camera body to assure a snug fit. Do NOT twist the camera plate, secure using the 1/4 screw with coin or screwdriver. Not using the screw might damage the rubber skid plate on your camera base. This would also apply to using the T-adapter as well. 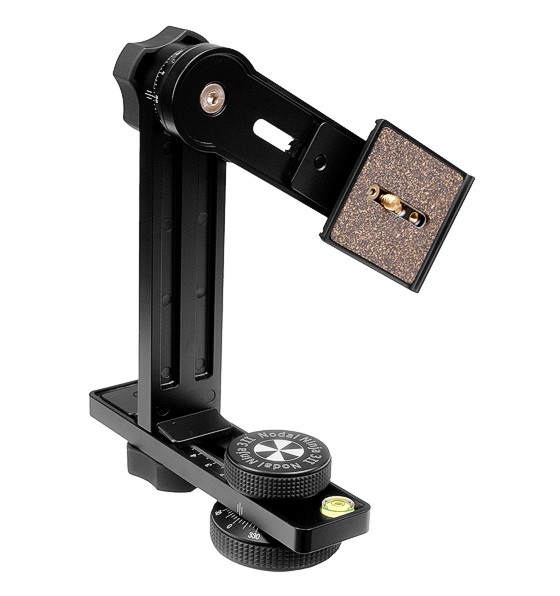 
This setup allows you mount your camera and lens in portrait mode (sideways) onto the upper rail on Nodal Ninja. 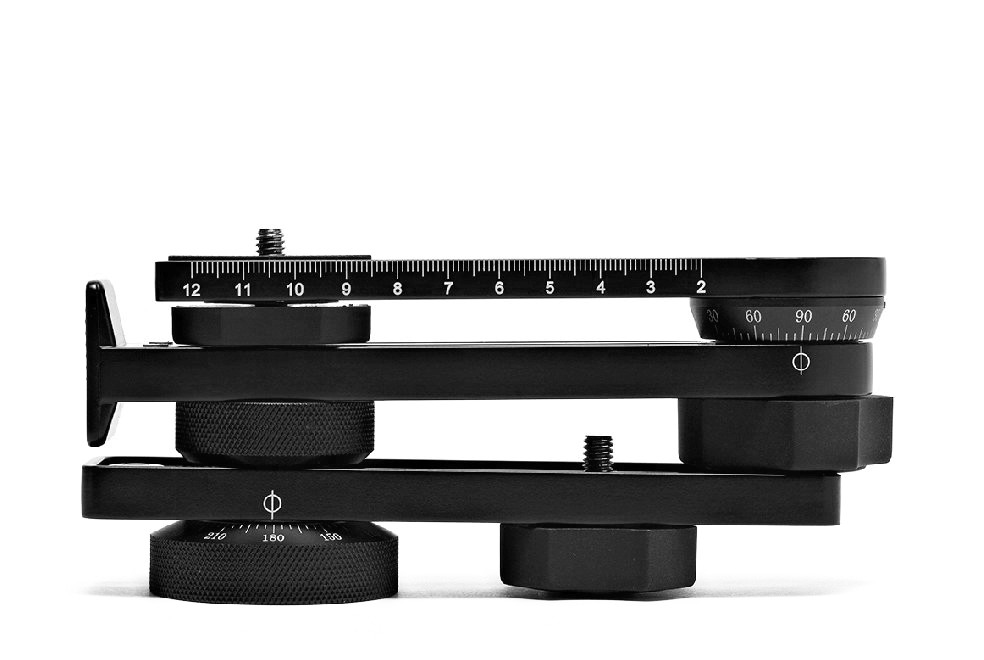